Nintendo managed to ship 9.41M NS in the last quarter (FY3Q19/CY4Q18). The global cumulative shipment of the console comes to 32.27M as of CY4Q18. Nintendo also revises down the forecast of NS from 20M to 17M for the fiscal year ending March 2019.  For reference, the pattern of NS shipment during this FY is as follow: 1.88M / 3.19M / 9.41M for FY 1Q19 / 2Q19 / 3Q19. Nintendo has shipped around 14.5M NS during the first three quarters which makes the new target of 2.5M in FY4Q19 quite reasonable and achievable. The guidance revision can be partially attributed to poor software lineup / schedule in the first two quarters.

The implication from forecast revision and Nintendo’s communication: 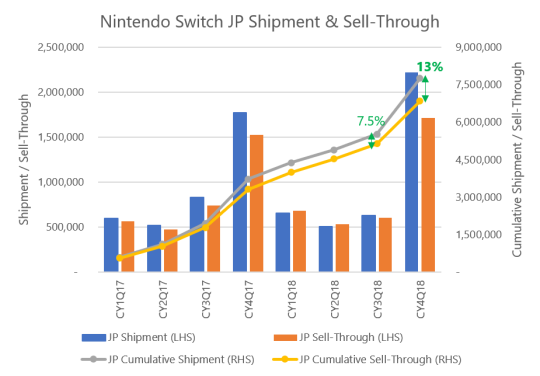 As expected, Super Smash Bros. Ultimate, Pokemon Let’s Go Pikachu / Eevee and New Super Mario Bros. U Deluxe did well in the last quarter and Nintendo revised up the software shipment from 100M to 110M. 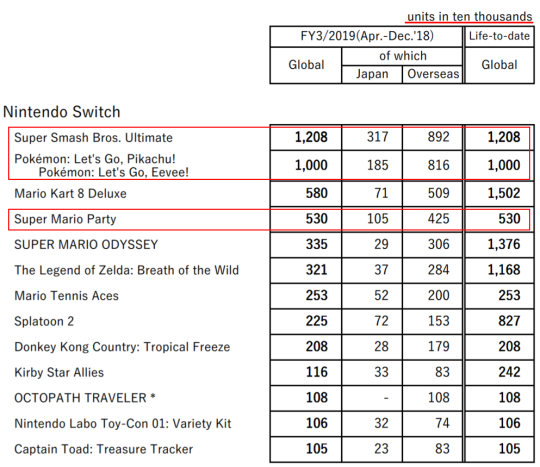 Thanks to system sellers in holiday season, the overall NS tie-ratio (defined as software shipment during the quarter divided by LTD hardware shipment by the end of the quarter) is back to trend. Given current software schedule, I expect the overall tie-ratio for FY4Q19 will be slightly higher than 1.1x. Lets’ see if Nintendo can schedule Animal Crossing to launch in summer to make the ratio less seasonal even though evergreen titles form the foundation of software sales.

Digital sales is performing as well. Digital sales number including Nintendo Switch Online in first three quarters of FY2019 jumped by 38.7% compared to the whole year of FY2018. The proportion of digital sales has increased to 21.8%. 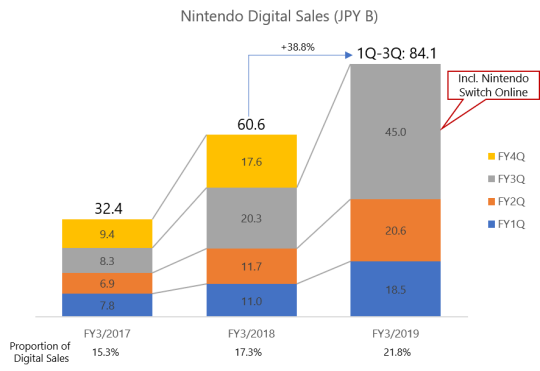 Both inventory and days sales of inventory (DSI) were both reduced to healthy level. 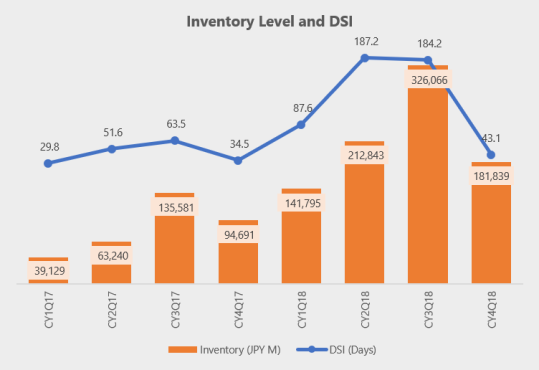 As expected, Nintendo said it will continue to leverage the installed base and rich  library of Nintendo 3DS. That said, the contribution from the handheld console will be less and less significant.

The performance of Smart Device was not impressive as the company is still experimenting in this space.

That said, if they keep their mediocre reporting on smart device performance and communicate their mobile app focus like below, this business segment is not going anywhere in the foreseeable. Targeting by number of new apps per year is another sign that the company still has no direction in app gaming space. Maybe Nintendo has some update in the business briefing next day.

As we endeavor to develop future planned applications, we will also focus on continued service operations for applications that have already been released so that consumers can enjoy playing them for a long time.

In order to improve quality of the application and expand the content offerings after launch, the release date has been moved to summer 2019.

At least it’s a delay rather than a re-development like Metriod Prime 4.

If you see the advertisement after two month since launch like below, it’s probably not a good sign.

@dragalialost @Nintendo add a QR code or something in the registration (while minimize the friction) to track the performance of this user acquisition channel. I believe Cos now have enough data to estimate “avg” CLTV and what they need to check is the cac on specific channel

Still waiting for more details to be disclosed in the business briefing. However, we can get some colors from CyberAgent’s presentation.

Power laws might also apply to mobile gaming so whether the uptick in January probably driven by cac depends on the fundamentals of gameplay and monetization.

[4.0] Overall Impression from this Earnings Release

Delays in Metriod Prime 4 and Mario Kart Tour, downward revision of Nintendo Switch shipment forecast and the conservative financial forecast make me feel Nintendo is enduring a transition period where it wants to bath and manage the expectation.

View all posts by yuinausicaa