The primary product level business model of Mercari is mobile app-based C2C marketplaces. Mercari’s C2C marketplace app portfolio has dominant market position in Japan. Mercari is trying to penetrate overseas markets with operations in US & UK. The US operation is still in early stage with GMV of US$ 71M in 3Q18 with MAU and other operation metrics undisclosed. The company now focuses on scaling up the US operation. The status of UK operation is unclear. Based on how the company reports, it seems the contribution from UK operation is neglectable.

Mercari has other ventures / initiatives such as Merpay (digital payment service) and Merchari (bike-sharing) to build a so-called ecosystem. The rationale behind building up an in-house payment system is quite obvious as commission expense currently accounting for around 1% of GMV in CY3Q18 (or ~ 10% of Net Sales) in Mercari Japan. Merely on the cost saving side, the more Merpay gets adopted by users, the more on-going commission expense Mercari can save. The business model of bike-sharing is unclear. Hopefully, it will not become a cash-burning initiative.

Group level business model is that the company uses cash generated by Mercari JP (a more mature cash cow) and money raised in IPO to fund other cash-burning “stars” such as Mercari US/UK and Merpay. Mercari acquired CARTUNE, a community service focusing on cars, via share exchange in October 2018. (One rationale behind the acquisition of CARTUNE can be found in Borja Moreno de los Rios’s post on Marketplace Liquidity) Mercari is also doing corporate venture capital (CVC) focusing on sharing economy, C2C businesses, and other ventures that aim to create a more active global marketplace.

Currently, Mercari adopts a straight forward 10% take-rate on GMV as its primary revenue stream. Going forward, it might implement different take-rates on vehicle parts as those components have high unit transaction price. The management’s attitude toward current take-rate level is that it’s reasonable. Mercari might be able to raise the take-rate by providing other value-added service in the future.

Mercari doesn’t disclose enough information on number of transactions so user behavior information such as transaction frequency and unit transaction size are missed. The participants at C2C marketplace can switch sides (overlapping between seller and buyer), so MAU is suitable as an unit measurement of transaction activity.

Below are monthly metrics only disclosed for FY3Q18

Mercari JP App downloads have already exceeded 70M while the MAU is only around 11M. To increase MAU, Merccari probably has to focus on user engagement. In terms of ARPU, transaction frequency might be increased by better curation, facilitation or community building. Unit transaction size depends on listing category and profile of user base (age, gender…).

An idea to increase good velocity (how many times a good has been changed hand): seller can leave a length-limited digital note on the item (virtual id) and can check the accumulation of notes when it changes hand with another note in the marketplace.

The unit economics shows that Mercari JP has potential to have a profitable growth when it further scales up if the competition is not fierce in the market. The healthy unit economics doesn’t mean this C2C marketplace has competitive advantage or is immune from competition.

Mercari JP has very high brand awareness and adoption among flee market app users in Japan. According to Macromill’s survey in CY2Q17, 94.0% of flee market app users responded they use Mercari. With the huge gap between app downloads and MAU, the implication of high market share is that the JP MAU expansion is a not task of user acquisition but user conversion and engagement.

Let alone marketplace differentiation (UI/UX…) / platform management, for a new entry or existing competitor willing to burn cash, price cut and subsidy (on shipping fees) are effective tools to make its marketplace another home for new users. If there’s no effective strategy to tackle multihoming behavior, price competition will just make everybody miserable except for users. With cash raised from IPO and access to capital market, Mercari is in a better position when competitors start price war.

The competition brought by Sea Group’s (SE.US) Shopee in Taiwan E-commerce market eventually led to the privatization of PCHomeStore (4965.TW) via share buyback by its parent company, PCHome Online (8044.TW).

Onlookers from other markets might think the straight forward take-rate ia unsophisticated. In addition to commission, there are various revenue sources a marketplace can charge its users.

Mercari describes Mercari JP as being in stable growth phase and Mercari Overseas & other initiatives like Merpay as being in investment phase.

The profitable growth of Mercari JP is critical to Mercari’s master plan. The management thinks 30% to 40% annual growth is healthy for a marketplace in stable growth phase at current GMV of JPY 99.0B in FY1Q19. It’s futile to guess how long the high growth can sustain. What’s really important is to identify source of growth and resources required to support the growth. As discussed in the unit economics, the source of growth includes:

If the company only focuses on users acquisition,  it can run TVCM, launch CRM program or even do M&A deals. There’s much more to be done besides merely spending the money.

Someone in the company needs to decide which advertising channel is effective to acquire / re-activate users , what kind of CRM program retains users and increases listing /transaction activities, what complementary community that fits in Mercari’s ecosystem…

To increase transaction activity on the C2C marketplace, probably strategies on community / social aspect / user generated content on the platform might work (my gut feeling…). Anonymous delivery is key to increasing social aspect in C2C marketplace. (The survey about Mercari JP’s satisfying features below was conducted by Mercari) 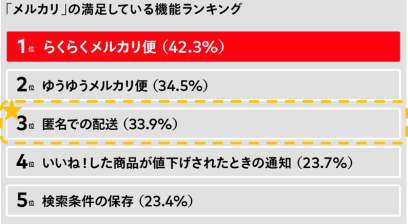 Human capital is indispensable to support the profitable growth of the marketplace. It’s relatively difficult for outsider to evaluate the workforce quality (while some Mercari’s talent acquisition activities have been reported). Mercari only discloses headcount information. It seems Mercari’s talent acquisition is heading in the right direction. How much value the increasing workforce can generate depends on the leadership of senior management. 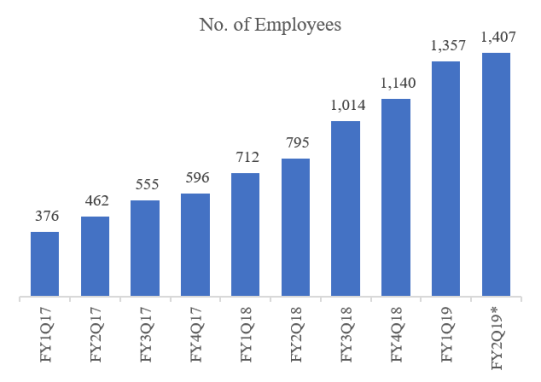 As most of user behavior improvement initiatives are data-driven, Mercari might focus on talent acquisition of engineers specializing in data science and algorithm.

It seems Mercari US is experimenting on advertising channels (offline & online). The Q&A session transcript revealed that Mercari US’ GMV has not reached the critical level (they determine the number is Monthly GMV of US$ 100M). In term of investment scale in US operation, Mecari targets to maintain current level before operation getting to critical level mentioned above or GMV growth becoming stronger.

As long as we remain on track toward achieving this, we will continue with the current level of investment, but if we begin to fall short, we may reconsider our strategy. On the other hand, if the GMV growth becomes stronger, we will consider increasing the investment amount.

The timetable of Merpay is not disclosed. By leveraging existing marketplace, the adoption of payment service system should be easier. That said, we might see some incentives offered by Mercari to get users onboard at launch of  Merpay.

Metrics and information not shown in the table above:

What to Bet and What to track

FY2Q19 earnings release is scheduled at 3pm or later Japan time on February 7, 2019. 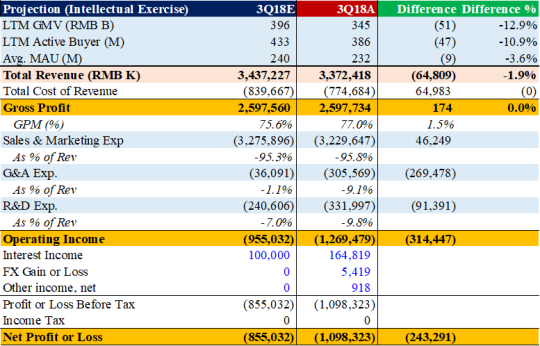 [1] Conversion rate defined as LTM Active Buyer / Avg. MAU decreased (an improvement for me) significantly by around 10 percentage points. 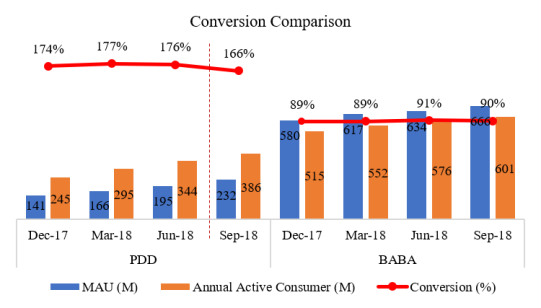 [3] Overestimation of adoption rate based on Wechat MAU

[Sales & Marketing Expense] Slightly overestimated by 1.4% which means the my LTM CAC approach and parameter estimation were both fine in 3Q18.

[General & Administrative Expense] Underestimate a lot due to noise of one-off share-based compensation in 2Q18. Now we have a clearer ratio (and hopefully more stable) to project going forward.

[Research and Development Expense] Underestimated the R&D exp ratio by 2.8%. Basically it’s at management’s discretion so if the company thinks it’s too early to provide guidance, what we can do is guessing based on historical data or other information.

[Operating Loss] Taking into above deviation, operating loss was underestimated by 33%.

Currently, PDD monetizes the marketplace by providing online marketing services to merchants and charges merchants commission fees to cover payment processing fees and other overheads. The mechanism of rake is still not built in the platform. Rake might be another revenue stream if the platform merchant profile and consumer behavior shift in the future (this might gradually happen if PDD’s attempt to build brand and trust works).

PDD has been fixing counterfeit product issues. Discount-oriented marketplace is more likely to have quality assurance and trust/credibility issues to deal with.

PDD monetize the marketplace directly and indirectly. Commission fee is more likely to have linear relationship with GMV while the relationship between OMS revenue and GMV is not clear at this stage. OMS revenue depends on merchant marketing spending to promote their products and how much PDD marketing service they use. Both revenue streams are driven by directly/indirectly by GMV.

Due to limited access to information, the modeling here starts with foundation platform MAU and applies an adoption/penetration rate to it to derive PPD MAU. Then a conversion rate is applied to PPD MAU to derive LTM active buyer. Then rolling LTM method introduces seasonality in quarterly projection. LTM GMV projection is based on active buyer and average spending assumptions.

One user behavior is discovered in the conversion analysis. As PDD only discloses LTM active buyers and three month ending MAU, if the conversion rate is defined as LTM active buyer / MAU, we would find the ratio is 176%. Two implication from positive deviation from 100%: 1) Monthly period might not be an appropriate time horizon to estimate gross user base; 2) the user base might experience a high churn rate which leads to high buyer acquisition/retention/re-activation costs for the marketplace.

Compared to PDD’s number , BABA’s ~90% looks more healthy although I’m not sure whether metrics are comparable.

The aforementioned concern can be checked with unit economics analysis. It’s difficult for a marketplace suffers from high churn rate resulting from either internal/external issues to enjoy the structural cost advantage on platform. Jun-2018 LTM Contribution Profit 1 (CP1) was 12.9 RMB per active buyer while All-in CAC increased to RMB 12.9 from RMB 5.5 in Dec-2017. 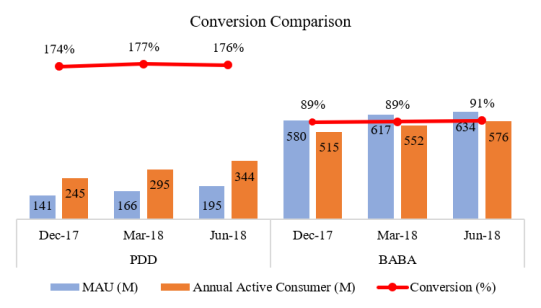 By leveraging the existing social network, the initial user acquisition cost for PDD is significant low compared to building up from scratch. Once the marketplace has solution demand-side in the start-up problem, it’s relatively easy to scale up the platform. PDD experienced exponential growth in the past 3 years. However, the increasing all-in CAC might indicate the network effect / scale in this type of platform business cannot protect it from competition on different value proposition.

The business model is easy for existing e-commerce players with scale to replicate. It seems switching cost at this type of marketplace is relatively, different marketplace will compete on value proposition and stickiness.

The good news is that it seems this marketplace is able to extract working capital from merchants when scaling up. Thus, if there’s no other major capital expenditure in the near future or ridiculous marketing campaign, PDD should have no additional external financing need.

It might be better to figure out the mechanism of the mezzanine equity base.

What to bet on?

This is a listed start-up: 1) execution on current business plan; 2) pivoting optionality; 3) acquisition target. The analysis should focus on its founder and management team.